I am a big fan of mixing natural light with flash. Location shooting often lends itself to creative lighting with speedlights. It might be simply supplementing the existing light to soften shadows. Or, it might be that I want to change the natural look of a scene completely by overpowering the natural light with flash. Below is an example of an outdoor location image. It features model Bernadette Lemon outside a small wooden hut in a garden carrying a basket of wood. 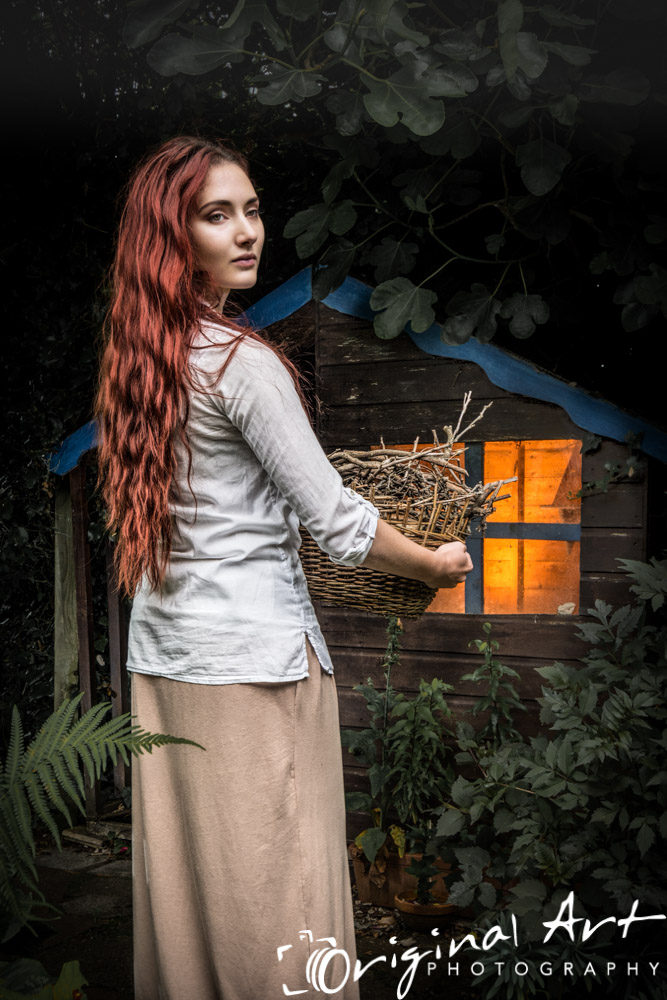 The idea for this was to make it look like it could be early evening. There would be a light coming from inside the hut that suggested there might be a fire burning inside. She would look as though she were taking a basket  of wood to the hut. To achieve this we needed to overcome the natural light with flash so that it didn’t look like the middle of the day. We also needed to make her and the hut stand out enough so that they were clear. Then, we needed to create a “fire”.

Below is the lighting diagram showing how this shot was lit. 3 Nikon speedlights were used along with remote triggers. The camera settings were: f/7.1, ISO 200,  1/125th second. With the shade under the fig tree this was enough too darken down our scene. The speedlights could then dictate the lighting more. 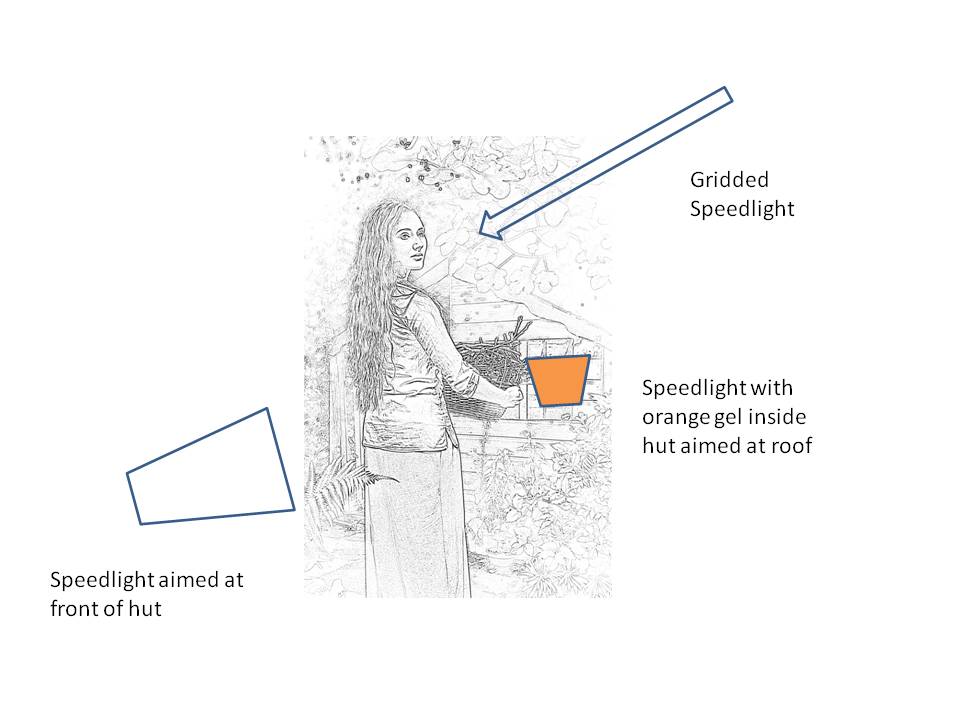 Bernadette was lit using a single speedlight mounted on a light stand. It was fitted with a grid to stop the light spilling all over the place. The front of the hut was too dark to show any detail so I lit that with a 2nd speedlight off to the left of the model. This light was just off ground level and was aimed at the hut. To create the illusion of a fire or candle burning inside the hut I placed a 3rd speedlight inside. It was fitted with an orange gel and aimed at the roof of the hut. It then took a couple of test shots to get the balance of the lights as I wanted them. Yes, you can use a light meter to help, but in this instance I used a couple of test shots instead to help me tweak the levels. The image was  processed with increased contrast and a darkening vignette to increase the effect.

So, that is an example of how I achieve creative lighting with speedlights on location. As with any use of lighting, always start simple and only add in what is needed to create the shot. I find it best to start with the main light. Get the power right for that before adding in any fill lights or other effects. Think about how wide or how focused you want your light to be. Choose the appropriate modifier(s).

I hope that inspires you to get creative with your lights too. If you are a bit nervous or unsure about using lights, you might like to come on one of my photography workshops. Alternatively, we can work 1-2-1 if you would like to explore things in more detail at your own pace.